Although Grand Canyon National Park is one the country’s most popular national parks, it’s not the only spectacular gorge managed by the National Park Service. Quite the contrary; in fact little known Black Canyon of the Gunnison National Park boasts some of the steepest cliffs, oldest rocks and craggiest spires in North America. In contrast to the 21-mile wide Grand Canyon, this Colorado chasm is just nine miles across. Couple that with 2,000-foot canyon walls which drop almost vertically to the Gunnison River, and the result is a jaw-dropping view. And although the canyon itself isn’t wheelchair-accessible, the best views are had from scenic overlooks along the rim, many of which are doable for wheelchair-users and slow walkers.

The best way to experience the natural beauty of Black Canyon of the Gunnison National Park (970-641-2337, www.nps.gov/blca) is to take the seven-mile scenic drive along the south rim of the canyon. Just follow Highway 50 west from Montrose, then continue along Highway 347 until it dead ends at the park entrance.

You’ll get your first view of the canyon at Tomichi Point, which is near the entrance, just past the campground. There is accessible parking near the rim, with level access out to the overlook. Not only is this a nice canyon view, but if you’re lucky you’ll also get a glimpse of the hikers on the aptly name Rim Rock Trail below. There are also accessible pit toilets in the parking lot.

Be sure and stop in at the Visitor Center, which is just up the road. There’s plenty of accessible parking there, and there’s level access to a very clean accessible restroom. Inside, there is barrier-free access to the theater, where a short film is shown, and good pathway access around the interpretive exhibits. There’s also level access to a large deck which offers an impressive canyon view.

The next accessible stop is at Pulpit Rock Overlook. Although there is a gravel parking lot at this overlook, accessible parking is available on the road. A hard-packed dirt trail leads out to the lower overlook which offers a sweeping view of the Gunnison River. There are a few bumps at the beginning of the trail, but it’s doable for most folks. To get to the upper overlook you have to go down some steps and then up a very steep ramp, but the river view is much better from the lower vantage point. There is also an accessible restroom at this stop.

Chasm View, which is the next stop on the route, offers the most impressive view of the canyon. Accessible parking is available near the main trail out to the overlook, but there are nine steps down to the viewpoint. The accessible trail, which is located to the left of the main trail, is longer, but there are no steps along the way. From the viewpoint you’ll get a dramatic view down into the chasm with the Gunnison River below. There are also five steps down to another viewpoint, but you can barely see the river from there.

Sunset View, which is just up the road, is a great spot to sit and enjoy the sunset (hence the name). There is accessible parking near the accessible sidewalk out to the overlook. Here you’ll find two picnic tables, including one that is accessible. There is a lower overlook to the right, but there are 15 steps along the route and some rocks and roots on the trail. Still, it’s hard to beat the view from the picnic tables. There is also an accessible restroom in the parking lot.

Last but not least, don’t forget to stop at High Point, at the end of the road. Although the one-and-a half-mile trail out to the overlook isn’t accessible, it’s still worth a stop. There’s accessible parking in the lot, and a dirt path at the far end that leads out to an accessible picnic table. It’s a much nicer spot to picnic than Sunset View, and since it’s away from the trailhead, it’s pretty isolated. Even if you’ve already eaten, this is a good place to take a quiet break before you head back. As an added bonus, the windshield views are totally different on the return trip.

Rest Your Head in a Yurt

Accessible campsites are available in the South Rim Campground, but if you’d prefer a few more creature comforts then head south to Ridgway State Park (970-626-5822, cpw.state.co.us/placestogo/parks/Ridgway) and set up housekeeping in an accessible yurt. It’s just a half-hour away, nestled at the base of the San Juan Mountains in Southwestern Colorado.

The accessible Beaver Lodge Yurt is located in Loop A of the Dakota Terraces campground. There’s accessible parking in front of the yurt and a paved pathway up to the front porch. Other access features include a threshold ramp and a wide door at the entrance, and good pathway access inside.

The yurt is furnished with two queen futons, a bunk bed and a table and chairs. The kitchenette has a small counter, and it includes a microwave and a refrigerator. And although there isn’t a bathroom in the yurt, it does have electricity, an overhead light and a stove for heat. Outside, there is an accessible picnic table and a grill on a cement pad, and a 15-inch high tent platform.

The bathroom is located next door. It’s a short walk on a paved campground road, but if you’d prefer to drive there is accessible parking in front of the building. Both the men’s and women’s’ restrooms have a large stall with grab bars and a roll-under sink. On the women’s side the grab bars are on the back and left walls (as seated), and on the men’s side they are on the back and right walls (was seated). An accessible family restroom is also located there.

The bathhouse is located in the camper services area, near the entrance to Loop A. There is level access to the men’s and women’s shower rooms, which both have accessible toilet stalls, roll-in showers and roll-under sinks. The toilet grab bars are on the back and right walls (as seated) in the women’s stall, and on the back and left walls (as seated) in the men’s stall. The pay showers are equipped with grab bars, a fold-down shower bench and a hand-held showerhead.

The bathhouse is just a short walk from the yurt, along the paved campground road. That said, you’ll have to negotiate the large speed bumps near the entrance to Loop A. Alternatively you can drive there, as there’s accessible parking right in front of the bathhouse.

Ridgway State Park is the perfect place to base yourself while you explore Southwestern Colorado, as the campground is clean, the hosts are pleasant and the yurts are comfortable. Yurt reservations can be made online at coloradostateparks.reserveamerica.com or by calling (800) 678-2267. Make your reservations early though, as the yurts go quickly, especially in the summer. 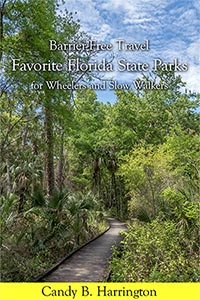