Moody Gardens — Not Just for Kids

Although there’s no shortage of frolicking offspring on the Moody Gardens website (www.moodygardens.com), this Galveston theme park is far from a kids-only enclave. In fact, may adults — including yours truly — have had a very entertaining and educational time at this giant aquarium, zoo, water park and entertainment complex. Granted, there are certain attractions that you’ll want to skip if you don’t have kids in tow, but with a little advance planning, just about anyone can have an accessible and entertaining time at Moody Gardens.

The best place to begin your Moody Gardens adult adventure is at the Aquarium Pyramid, which is located near the entrance. There’s a barrier-free pathway to the aquarium from the accessible parking area, and level access to the building. An excellent example of universal design, the pyramid boasts a massive floor-to-ceiling tank with ramp access to all levels, and offers visitors a whirlwind tour of the world’s oceans.

The galleries are divided geographically by region, and feature sea creatures from the Gulf of Mexico, the South Pacific, the North Pacific and the Caribbean. Highlights include cat sharks, seahorses and the incredibly cute penguins. And since five out of seven species of sea turtles reside in the Gulf of Mexico, there’s also an excellent sea turtle exhibit. Best of all, with barrier-free access to all areas, nobody is left out.

The Rainforest Pyramid, which is connected to the Aquarium Pyramid by a level walkway, is also worth a visit. The ground floor houses a number of exotic rainforest animals in individual enclosures, with barrier free access throughout the exhibit.

From there, visitors can take the elevator to the top and explore the tree top boardwalk. There’s level access along the length of the boardwalk, which puts folks at eye level with the arboreal inhabitants.

Like in the aquarium, the boardwalk gently winds down to the forest floor, where you’ll find macaws, flamingos, and even otters. On the ground there’s level access past exhibits that house a variety of endangered plants and animals, with alternate ramp access to the few places that have steps. Don’t miss the alligators, boa constrictors and the komodo dragon. All in all, it’s an excellent attraction for animal lovers of all ages.

Be sure and save time to catch one of the 3D or 4D IMAX movies shown throughout the day on the largest movie screen in Texas. The 4D movies are basically 3D movies that include physical effects such as rain, wind, strobe lights and vibration.

There’s level access to the theater, and wheelchair-users have a choice of two seating areas. If you’d like to sit near the front, then go in the main entrance; but if you’d like a seat in back, ask the usher to open the exit for you. Accessible seating and nearby companion seats are available in both areas.

Top movie selections include flicks that allow you to swim with Great White Sharks or get up-close-and-personal with a pod of Humpback Whales. Check the movie schedule in advance though, as although the majority of the presentations are nature related, they do sneak in a few SpongeBob features now and then.

Top off your Moody Gardens visit with a cruise on Galveston Bay aboard the Colonel paddle wheeler. Located on the far end of the park, this replica of an 1800s paddle wheel boat offers hour-long cruises throughout the day.

There’s a level boarding ramp that leads up to the second deck, and room enough for a wheelchair to navigate in the outside seating area. There is also an inside cabin which has a small snack bar and accessible restrooms. Although there is a three-inch coaming at one doorway, the other one has a scant half-inch lip, and is quite doable for wheelers. The other decks are only accessible by stairs, but the view from the second deck is excellent, so there’s really no need to leave.

Back on shore, there’s a nice accessible waterfront path that leads from the dock back out to the parking lot. It’s not the most direct way to leave the park, but if you’re up for a walk it’s off the heavily trafficked routes. If on the other hand, you’re too tired for the trek, the wheelchair-accessible park shuttle also stops at the dock. Either way, don’t miss the cruise, as it’s a relaxing way to end the day. 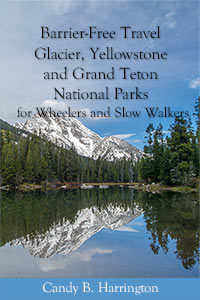