The Town That Hershey Built

Located just east of Pennsylvania’s capital city, the purpose-built town of Hershey was created by namesake chocolatier Milton S. Hershey. His premise was simple — he wanted a pleasant place for his factory workers to live, because happy employees were productive employees. That was back in 1905 and since then the Hershey empire, and the town, have expanded exponentially. And even though a theme park now dots the horizon, it’s still possible for wheelchair-users and slow walkers to get a taste — literally and figuratively — of Milton S. Hershey’s grand vision.

Milton Hershey’s model industrial community was patterned after Bournville — an English village that was developed by Cadbury, in order to elevate their workers living conditions. Hershey’s vision was similar to his English counterpart’s, in that he wanted a place where his workers — and his factory — would thrive. He chose the Pennsylvania location because it contained four essential resources — water, workers, a railroad and milk.

Unlike other factory towns of the era, the town of Hershey lacked the dreary row homes, and instead boasted tree-lined streets with comfortable brick houses and tidy front yards. Milton provided social diversions as well, including parks and recreational opportunities. Additionally many of the public buildings — including the community center, theater, sports arena and stadium — were constructed during the Great Depression as part of Milton Hershey’s personal campaign to provide jobs for the unemployed. Hershey’s world travels also influenced the town’s design, and he even incorporated some Mediterranean elements in his visionary project.

Additionally, the Hershey Industrial School was established by the chocolatier in 1909. Originally a school for orphaned boys, it later became the Milton Hershey School in 1951, and then went coed in 1976. Today Hershey’s legacy continues to nurture children and prepare them for adulthood.

Hersheypark has grown from the small original community park with a bandstand and merry-go-round, to a full scale theme park. That said it’s still possible to catch a nostalgic glimpse of the old town. Best bet is to visit on weekdays during the fall when the theme park is closed, when it’s easy to dodge the peak season crowds and long lines. Check the park calendar at www.hersheypark.com/info/hours/ and plan your visit accordingly.

The Man and His Vision

For a good primer on Milton Hershey, his vision and his chocolate business, make sure The Hershey Story (hersheystory.org/) is the first stop on your itinerary. There’s accessible parking in the adjacent garage, which is just a short level walk from the front entrance. There’s level access to the building, which is equipped with automatic doors. Inside there’s good pathway access to the ticket desk, museum shop and Pantry. Accessible restrooms are located on the main level, and there’s elevator access up to the second floor. There’s also a wheelchair available for loan at the front desk.

There’s barrier-free access throughout the galleries, and plenty of room to maneuver even a large wheelchair around the exhibits. The first floor houses a comprehensive exhibit on Hershey’s Cuban heyday, in the factory town Milton created on the island nation. When sugar was hard to come by in the states during WWII, Hershey constructed his own sugar mill in Cuba, and — like in the US — built an attractive factory town nearby. The exhibit walks visitors through Hershey, Cuba with all its public spaces and clubs — including the social club, sports club, dance pavilion, golf course, theater and baseball team.

Upstairs exhibits detail the history of the chocolate brand from its humble beginnings in a Philadelphia chocolate shop near the 1876 Centennial Exposition. The exhibits include photos, factory videos, storefronts, chocolate promotions and a look at the Hershey products over the years. There’s also an interesting exhibit about the infamous chocolate kisses — Hershey was one of the first people to capitalize on wrapping chocolate confections separately. And don’t miss the the living history exhibit, where residents share what it was like to live and work in the quaint factory town.

A Taste of Hershey

To learn more about the Hershey products — and to get a taste or two — hop on over to Hershey’s Chocolate World (www.hersheys.com), which is just a short drive away. There’s accessible parking near the entrance, and level access to the building, which houses exhibits and adventures that celebrate the delicious Hershey products.

On the free side of things, there’s the Hershey’s Chocolate Tour. If you can’t do stairs, let the folks at the beginning of the tour know, and they will direct you to the step-free route. Once you get to the ride entrance, you need to cross a moving walkway to board the whimsical cocoa bean cars that take you through the imaginary chocolate factory. Power wheelchair-users need to transfer into a manual wheelchair to traverse the moving walkway, and then transfer to the moving cocoa bean car. Employees are on hand to assist, but again, the cocoa bean car is moving, so the whole process is difficult if not impossible for many folks. And if you aren’t steady on your feet, request the manual wheelchair to get over the moving walkway, as it moves quickly. The good news is — you’ll be rewarded with a chocolate treat at the end.

The Create Your Own Chocolate Bar experience, while not free, is much more accessible. There’s barrier-free access to the kitchen where you don an apron, and lowered computer consoles where you choose the ingredients for your chocolate creation. After that you watch the bars come down the assembly line, where they are boxed before they are presented to the chocolate chefs.

Even if you don’t make your own candy bar, Hershey’s Chocolate World is worth a stop for the largest Hershey candy store in the world. Surely you’ll find some of your favorite treats there.

Stop and Smell The Roses

Last but not least, make sure and stop at Hershey Gardens (www.hersheygardens.org/) while you’re in the area. The original 3.5-acre rose plot dates back to 1937, and today it has expanded to become a 23-acre botanical garden. Mr. Hershey decided to create the rose garden after he was approached to sponsor one in Washington D.C. Instead — in keeping with his style — he opted to put the money towards something that his own community could enjoy.

Accessible parking is available in front, with a paved pathway to the entrance to the conservatory. One of the highlights of the garden is the butterfly atrium, which is located near the entrance. This colorful exhibit features hundreds of colorful butterflies from around the world. Along with the butterflies that fly free in the atrium, there are also a few enclosed displays which feature some exotic insects. It’s a great opportunity to get a close look at butterflies, and there are plenty of volunteers on hand to make sure that the butterflies don’t follow visitors into the gardens.

Outside, the brick pathways through the gardens are mostly level, with good directional signage along the way. The infamous Hershey rose garden is right outside the conservatory, so even if you can’t go very far, you can still enjoy the 3,500 bushes that surround Swan Lake. The Japanese garden, the rock garden and the herb garden are also worth a visit. And even if you don’t have any kids along, be sure to stop in and see the children’s garden, which is decorated with Hershey kiss misters, licorice ornaments and Hershey bar blocks.

The gardens are a pleasant place to linger, and there are comfortable benches tucked away in shady nooks. So take your time to literally stop and smell the roses on your next Hershey visit.

Located just east of Pennsylvania’s capital city, the purpose-built town of Hershey was created by namesake chocolatier Milton S. Hershey. His premise was simple — he wanted a pleasant place for his factory workers to live, because happy employees were productive employees. That was back in 1905 and since then the Hershey empire, and the town, have expanded exponentially. And even though a theme park now dots the horizon, it’s still possible for wheelchair-users and slow walkers to get a taste — literally and figuratively — of Milton S. Hershey’s grand vision.

‹ Take a Wheelchair-Accessible Hike at Colorado’s Garden of the Gods › Cruise Beverage Packages — Are They Right for You? 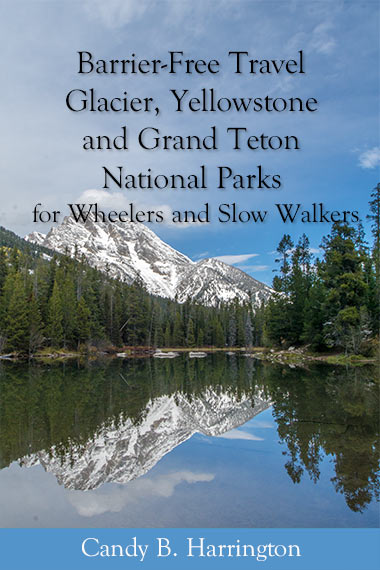