A Caving We Will Go!

Generally speaking, caves and caverns aren’t very accessible. After all, in most cases they’re underground. That said, where there’s a will, there’s a way. Although these subterranean showplaces don’t have an elevator like Carlsbad Caverns, or an accessible drive-through tour like Fantastic Caverns, they’re definitely worth a visit, as access features have been added to make them more accessible for wheelchair-users and slow walkers.

Located in Hart County Kentucky, just 15 miles west of Munfordville, Cub Run Cave (270-524-1444, www.cubruncave.net) was first discovered in 1950. Shortly thereafter it was closed to the public, and remained boarded up for over 55 years. In July 2006 it reopened for tours, and because of the long hiatus, it’s still in pristine condition.

Although access upgrades were added for the grand reopening, it still doesn’t have true barrier-free access. In fact the owners bill it as “handicap friendly”, rather than wheelchair-accessible. That said, since a self-defined “slow walker” recommended it to me — and since she was very excited to find it doable for her — I thought it was worth a mention.

The tour actually starts at the Cub Run Cave Gift Shop and Restaurant, which has level access, with parking in a gravel parking lot in front. Tours are held three times a day in the summer, but they may be cancelled during heavy rains. There is also level access to the restaurant next door, which offers an all-you-can-eat catfish special. And although the restrooms are big enough for wheelchairs, they lack grab bars.

From the gift shop, visitors follow the tour guide in their own cars down to the cave entrance, which is about a mile down the road. There’s plenty of room for parking in a gravel area outside the cave. That said, you have to be able to make your way up four steps to get inside the cave. After that, there are wide level walkways and elevated boardwalks through the cave, with another 10 steps near the halfway point. The one-and-a-half-hour tour is very interesting, and you’ll see cave wildlife like blind crayfish and salamanders, as you make your way along the quarter-mile walkway past massive stalactites and stalagmites and gorgeous crystal pools.

According to the tour guide, wheelchair-users have done the cave tour, but they had to either be assisted or carried up the steps. They do ask that you call and chat with them if you have any access issues, so they can properly prepare for your visit. Additionally, they hope to ramp the entrance in the future, so don’t hesitate to check back to see if more access upgrades have be added.

Last but not least, don’t miss Smallin Civil War Cave (417-551-4545, www.smallincave.com) when you’re near Springfield, Missouri, as Kevin and Wanetta Bright will warmly welcome you to this historic — but accessible — cave.

There’s accessible parking near the office, with a barrier-free pathway to the front door. From there, it’s just a short walk to the cave, down the back ramp and over a wide gravel pathway.

Once home to a group of Osage Indians, the cave also served as shelter for traveling soldiers and reportedly housed a Union spy during the Civil War. Today history-buff Kevin leads visitors on an informative one-hour cave tour, which begins at the natural entrance. There is level access to the cave, and the half-mile cement walkway makes it accessible to everyone. It should be noted that there are a few patches of the trail that have a slight incline, so some manual wheelchair-users may require a bit of assistance in those areas.

Geologically the cave is quite diverse, as you’ll see tufa, soda straws and a variety of fossils (including a shark tooth) on the ceiling; but by far the highlight is Kevin’s’ historical interpretation of the cave. Tours are held every 30 minutes in the summer, but as Kevin notes, “they can be weather dependent.”

If you’re looking for a fun place to eat after your cave tour, then head on down the road to Lambert’s Cafe (417-581-7655, www.throwedrolls.com), home of the “throwed rolls”. There’s plenty of accessible parking out front, with level access to the entrance, and a wheelchair available for loan at the front desk. They serve up everything from steak and ribs to ham, chicken, shrimp and catfish, with the sides all served family style. Then there are the rolls, which are thrown to diners. And according to Wanetta, “It’s a honor to be hit with a roll at Lambert’s.” It’s a very homey place to eat, but don’t forget to bring some cash, as Lambert’s doesn’t accept credit cards. 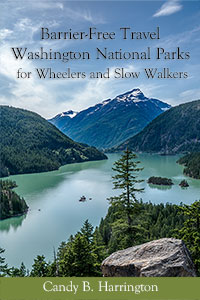