The Wonders Down Under

Whenever the words “underground mines” are uttered, visions of coal mines, gold mines and maybe even silver mines tend to crop up. But there’s another subterranean discovery that’s often overlooked — salt. That’s right, salt. In fact one of the world’s largest salt deposits is located in central Kansas; and today visitors can travel 650 feet below the surface at Strataca (620-662-1425, underkansas.org) to discover the wonders down under and see what salt miners experience on a daily basis.

Located in Hutchinson, Kansas, the tunnels below the Strataca welcome center were once part of the Carey Mine, which opened in 1923. Now known as the Hutchinson Salt Mine, it still produces over 500,000 tons of rock salt per year. The original mineshaft, which is north of the salt museum, is still in use today; while the passageways that comprise Strataca were abandoned long ago by the mining company. As an interesting aside, part of the underground Strataca space is also used to store original Hollywood movies as well as important documents from around the world.

There’s plenty of accessible parking in front of Strataca, with level access over to the welcome center. Inside there are accessible restrooms, and plenty of room to navigate around the exhibits. The tour starts with a short safety video, after which visitors don hard hats and head over to the elevator for the ride down into the mine. For slow walkers, there are wheelchairs available for loan at the front desk, and the tour is good for people with power wheelchairs, scooters and manual wheelchairs. And although the ride down in a dark elevator is a little creepy, it prepares you for the underground world.

There’s good access to all the galleries and exhibits in the mine, and the self-guided tour helps shed some light on what life in a mine is really like. It also offers a look into the past, in the stratified mine walls that were formed some 250-290 million years ago by the Permian Sea. There’s also an accessible restroom in the mine, and I have to admit it’s the first restroom with salt walls that I’ve ever seen.

Although the exhibits are interesting, the highlight of the tour is the Dark Ride, which is pretty much like it sounds. The 30-minute tram tour travels through some lit areas, as the guide explains air flow, mine hazards and other interesting tid bits. And yes, at times, the tour is in total darkness. The tram has a wheelchair-accessible car that features roll-on access and spaces for two wheelchair-users. It’s a fun and accessible ride, and it stops half-way along the route for visitors to pick up their own rock salt souvenirs.

There is also a train ride through the underground caverns, but there is a step up to the train, and riders have to be able to get from the gate to the train — about 30 feet — on their own power. Because of safety restrictions, wheelchairs are not permitted on board, so this is only an option for slow walkers. It’s only a 15 minute ride, but it goes into a portion of the mine that was mined in the 1940s. It’s interesting if you can manage it, but to be honest the Dark Ride is more exciting.

All in all, Strataca is nicely accessible, and the powers-that-be went above and beyond to make sure that everyone can enjoy this unusual attraction. And as an added bonus, it’s a great place to cool off on a hot day. No matter how you slice it, Strataca is a must-see attraction on any trek through the Sunflower State. 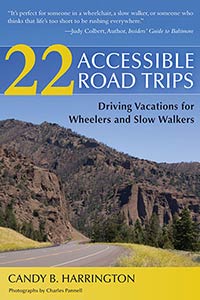